We interviewed Rikke Becker Jacobsen, Associate professor at Aalborg University’s Centre for Blue Governance and co-leading ECOTIP’s work on socio-economic consequences of biodiversity change. She has been doing some very interesting fieldwork in Greenland lately, and we were keen to hear about the preliminary results.

Below is a transcript of our conversation, it has been lightly edited for clarity.

Can you tell us about your involvement in ECOTIP?

My research focuses on what is going to happen for the fisheries as a result of the changes in marine ecosystems due to melting ice. Fisheries are immensely important to Arctic societies and the Greenlandic society and economy, so we also research what kind of adaptation could be relevant.

Some of our main research will be to understand the diversity of who is being impacted, based on their region. In the south, mid- or northwest of Greenland changes might manifest themselves differently. The north is experiencing opportunity. Cod is moving north, and the halibut fisheries are doing well. While in the south there is loss of fishery access, there have been less opportunities for a while, and it doesn’t seem like any strong new opportunities are emerging. The Midwest/Nuuk area is not experiencing any positive opportunities now either. The offshore fishery has invested in adaptation to the new pelagic opportunities which have presented themselves periodically in the region.

What is special about Greenland is that the whole national economy is so dependent on the fish resources. Fishery accounts for 95% of the exported goods. So, if one of the important fisheries disappears, it will really affect the national economy of Greenland, and it could affect social services. The household economies could be impacted in different regions. 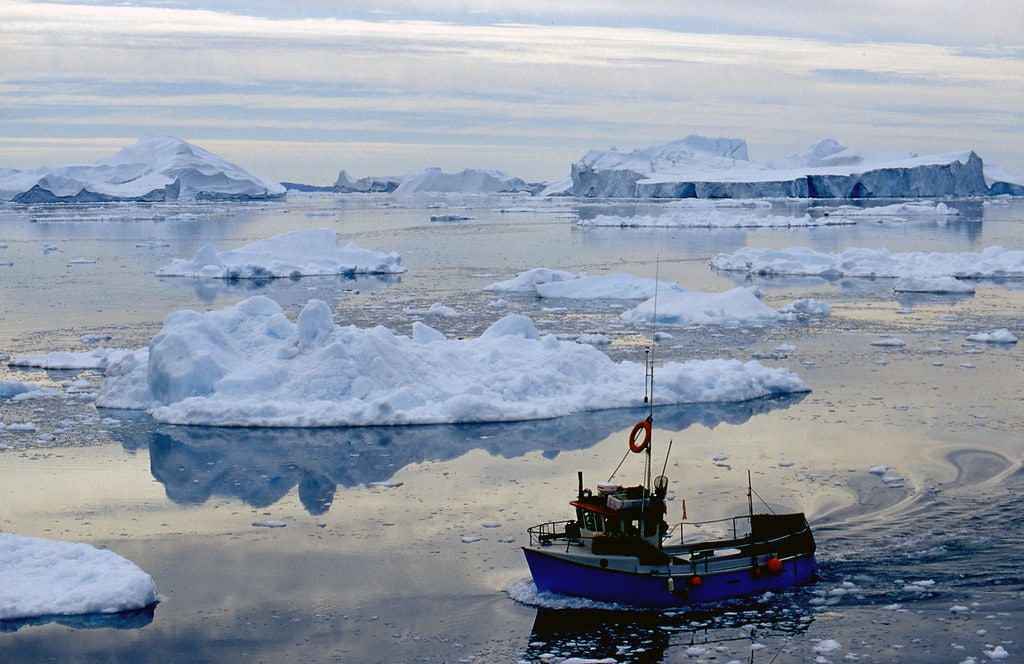 There are different kinds of fishery related communities within a town (coastal fishermen as well as seafood company office workers and offshore trawler staff). There is an offshore vs. inshore divide also and there are completely different conditions for the different industries. The offshore fishery has a mobility advantage, since they can go where new opportunities are. They also have the advantage economically, since they are consolidated and can themselves finance whatever investments they need. For example, to buy some new equipment. Small-scale and coastal fishermen rely more on the bank of Greenland and the loans that they can get, depending on what the interest rates are. Sometimes they will get a loan from the offshore seafood companies, which creates a certain power dynamic of opportunity and non-opportunity in itself.

Did you have this diversity of community members represented in the last workshop that you conducted in Nuuk? (Read more about that workshop here.)

The workshop was limited exclusively to stakeholders within the fishing industry, for the purpose of gathering user knowledge on fishing industry adaptation. We didn’t have anyone who could speak for the national economy, or for south Greenland as a municipality, for example That is something we need to supplement in different ways, but for now it’s fine to get a grasp of how the fishery has been adapting, offshore and inshore, and then also in different regions. The workshop participants could assist in explaining relevant environmental changes, how fisheries have been adapting and helped drawing some preliminary patterns of differing regional impacts. 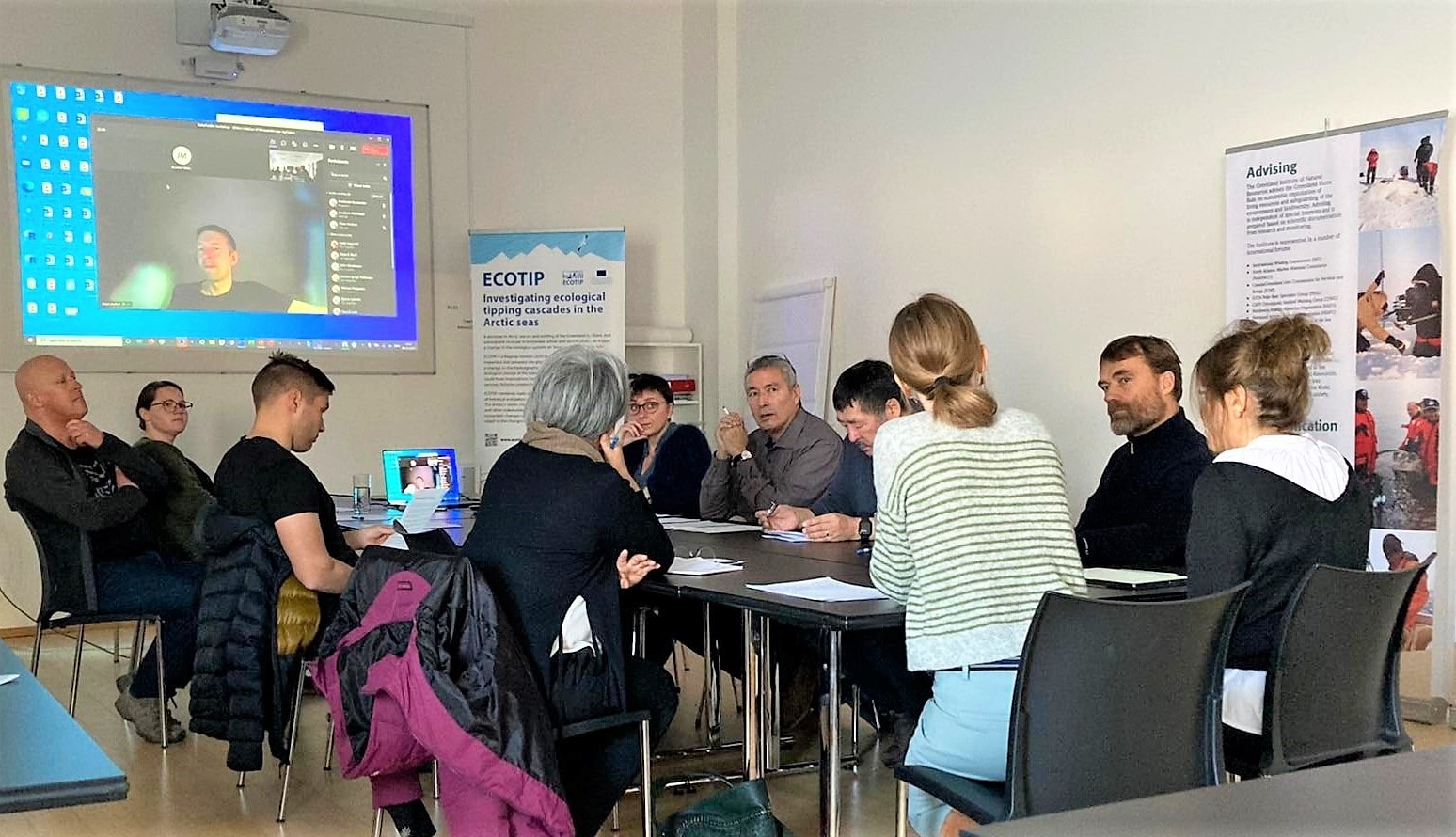 We will supplement this workshop with field studies in three locations, so we can gain more knowledge about the different regional patterns.

What has your fieldwork been focusing on?

Following the workshop in Nuuk, the first fieldwork began. We invited small scale fishermen from the Nuuk Harbour to share their knowledge and observations of changes, and also talk about how the fishery in Nuuk is doing from their perspective. What is the situation? What do their seasonal rounds look like today? What are the main changes that have been occurring? Is there an optimism or a pessimism on the ground?  We will do similar interviews in south Greenland and northwest Greenland in 2022.

It’s exciting to do interviews with fishermen. Their knowledge is not written anywhere, it’s just common sense to them. Yet, they are very good communicators and good at explaining  the changes that occur in their area of the Arctic. They have some problem perceptions that come from many different places. There are always new perspectives.

In your interviews, is there any differentiation between local inhabitants and Indigenous peoples?

I don’t differentiate among fishermen in Greenland based on ethnicity. In Greenland, the concept that is typical to use in this context is ‘user knowledge’. Greenlanders are ninety percent Inuit.

In Greenland, use of knowledge/user knowledge is encouraged. Greenland is 90% Inuit. People are Greenlanders. So very often the user knowledge is what you would term indigenous knowledge. Indigenous is often the default. But you will also have trawler skippers from Faroese Islands for example or some coastal fisherman originating from another country. The advantage of user knowledge as a term is that it can include both.

It’s really interesting. If you look at the characteristics of this type of knowledge, it’s comparable to what you would also see in Sápmi or Nunavut. There’s an intimate knowledge of the environment and a historical and inter-generational aspect in the knowledge that’s being referred to. I.e. ‘back in time, that’s what my parents did…” there’s a collective dimension. There are also similarities to ‘fisherman knowledge’ elsewhere which differs from the scientific knowledge in that it is experience-based.

Observations about the environment are especially nuanced. For example, while we were conducting interviews about Cod in the Nuuk fjord 10 years ago, the interviewees couldn’t explain the movement of cod without including that it is because of the seasonal temperature changes, and seasonal differences in prey availability, telling the story about cod following the natural conditions in the fjord and also following the prey. The capelin also becomes part of cod-story in the spring. When interviewing fishermen about the cod, you will get a holistic description about what is happening in the Nuuk fjord as a whole.

In the interviews we just conducted,  fishermen observed increased output of meltwater from the glaciers, which is in the bottom of that fjord, and how that has changed the temperature and is impacting the cod. What they are saying is that the cod season has become shorter recently. They put their net along the coastline and attach it to the seafloor. They can only catch the fish with their technology when the fish is in certain places. And now the fish are going deeper to get some warmer water, which means they are going more inside the fjord. This fish behaviour that is a result of the temperature is now impacting their fishery negatively. There’s also an outlet of increased material such as mud and more algae bloom, which gets into their nets and makes fishing more difficult.

I think Greenlandic fishing knowledge is quite impressive and I haven’t experienced that elsewhere when doing interviews with fisherman in Europe for example. It’s also very different from the stories you will hear when you paint with broad strokes about what’s happening in the Arctic, when you get into the detail of what’s happening in one fjord.

There is a lot of more academic and scientific literature about indigenous knowledge and local observations, but it’s more centred on marine mammals and birds and sea ice, and the knowledge that hunters have. There is a bigger tradition for this in regard to the hunting as compared to the fishing, so it is relevant that we do the interviews and get the fishing perspective from the local user knowledge.

"Fortunately for ECOTIP, when you hear fishermen talk about what are the important changes, they actually explain most changes in terms of sea currents, salinity, temperature, and algae blooms. So I believe that the scientific focus of ECOTIP is relevant and of interest to the local ecological knowledge and vice versa."

The plan is to get discussions about adaptation going, because ECOTIP is so future-oriented. My plan is to take a look at the last ten years and see how the fishery responded to climate and other changes; then to make an analysis of adaptation behaviour and typical types of challenges based on what have happened so far. What were the factors that made coastal fishermen, trawlers and the management system capable of adapting? Where was the resilience? By the end of 2022 we can have a retrospective analysis on characteristics of the current fishery and governance system: what types of changes occurred and what types of adaptation they typically engaged with.

From this analysis, we can extrapolate basic discussions on what we could expect of the fishery and the management system in terms of their ability to respond to these changes. Then towards the end of the project we will be doing more future-oriented discussions and hopefully co-produce some policy advice together with different stakeholders..

The final outreach from ECOTIP in Greenland is very important. In line with the on-going discussions within the Greenlandic research community, I think it’s important that the research we conduct in or about Greenland should benefit Greenland, and be communicated to the Greenlandic societies.