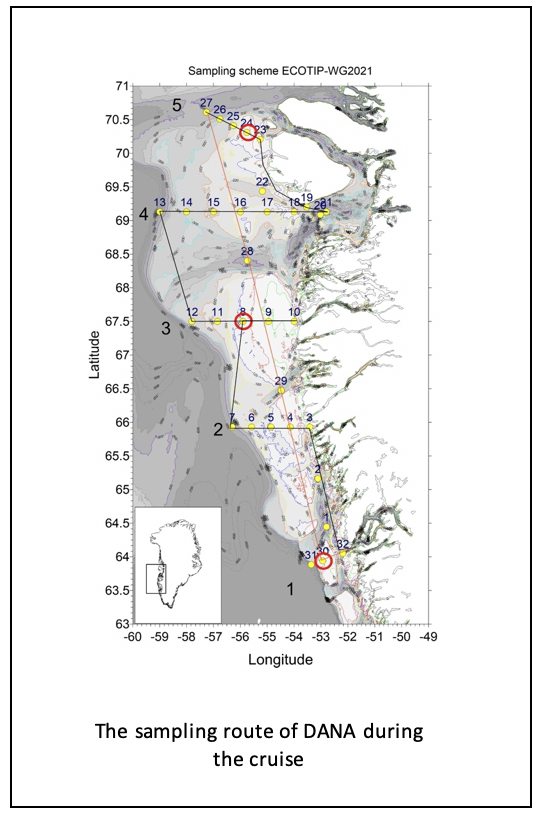 Nuuk, Greenland - A group of 20 scientists will embark on a 2-week research cruise leaving from Nuuk, Greenland on Saturday 17 July to investigate changes in the marine environment off Greenland´s west coast, and what these changes mean for the ocean´s ability to provide fish and sequester carbon from the atmosphere.

The cruise is being financed through the European Horizon 2020 research project ECOTIP, and will investigate a number of globally-important processes in the marine environment that are thought to be happening due to climate change.

These include whether rising ocean temperatures and freshwater input from glaciers in Greenland can trigger a shift in marine ecosystems, which might affect both fisheries production in Greenland and the ability of oceans to sequester carbon from the atmosphere.

The cruise features a strong focus on the micro-organisms at the bottom of the food chain – the phytoplankton and zooplankton – which form the basis of almost every ocean food web, and which scientists believe are being directly affected by the changes in the climate – notably from the freshwater input from Greenland´s melting glaciers that changes the stratification of the ocean. Stratification is the separation of water into different layers and acts as a barrier to water mixing.

“We hear a lot of tipping points in physical systems, such as melting of the Greenland Ice Cap, but much less about the consequences of these to the biological system”, notes Marja Koski, a biological oceanographer at DTU and project lead of ECOTIP. “Nevertheless, a strengthening of the stratification resulting from increasing freshwater will have profound effects at the basis of the marine food web, with changes that could ripple through the food chain right up to the fish”, she adds.

The research cruise will also have a strong focus on seafloor (benthic) ecosystems, sedimentation and the use of paleo-oceanography, which will bring new information on how the food (plankton) from the surface makes its way to the bottom and how it is then taken up and processed by animals on the seafloor.

The research cruise will sample the marine environment from Nuuk up to Disco Bay, along five transects that will cover marine life from the smallest organisms to fish larvae and juveniles. Sampling will take place from close to the coast and across the Greenland shelf (see map). The cruise will to some extent follow historical tracks allowing for comparison between recent and historical conditions for marine life.

DANA is Denmark´s largest research vessel. This Arctic research vessel has space for 38 people including crew and scientists. DANA plans to arrive in Nuuk from Reykjavik, Iceland on the 13 July and set sail on 17 July once all scientists have arrived and are all installed. The Dana will return to Nuuk on the 30 July. Here is a video about DANA and its research capabilities (in Danish):