Back From The Sea Of Icebergs 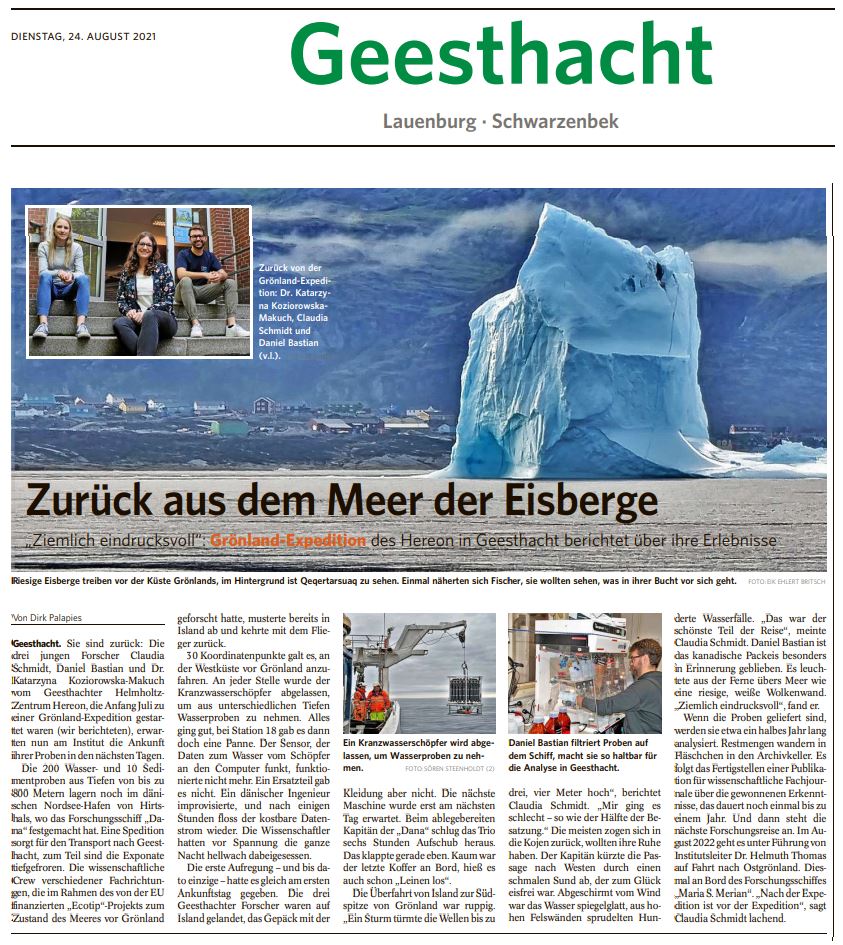 The rough translation of this article is as follows:

Three young researchers Claudia Schmidt, Daniel Bastian and Dr. Katarzyna Koziorowska-Makuch respresenting Helmholtz-Zentrum Hereon in Geesthacht, are back from an expedition to Greenland which started at the beginning of July and are now awaiting the arrival of their samples at the institute in the next few days. The samples are 200 water and 10 sediment samples from depths of up to 800 meters. The scientific crew from various disciplines were part of the EU-financed “Ecotip” project focusing on the state of the sea off Greenland. 30 research points were utilised on the west coast of Greenland. At every point the water was collected from different depths to take water samples.

Everything went well, but at station 18 there was a glitch. The sensor monitoring data on water no longer worked, and there was no spare part. A Danish engineer improvised, and after some hours the precious data stream flowed again. The scientists were awake all night because of the tension and excitement.

Several exciting things happened. On day one after arrival the three researchers landed in Iceland, but their luggage containig all of their clothing did not. The luggage was expected the next day, although there was a six hour delay.

The crossing from Iceland to the southern tip of Greenland was rough.“ A storm was piling up the waves three or four meters high, ”reports Claudia Schmidt. “I was bad - like half of the crew. Most of them retired to the back, wanting quiet time. "The captain shortened the passage to the west by one narrow sound, which fortunately was ice-free. Shielded from the wind the water was as smooth as a mirror, and there were hundreds of waterfalls. "That was the most beautiful part of the trip, "said Claudia Schmidt. Daniel Bastian remembered the Canadian pack ice in particular. From a distance it shone over the sea like a huge wall of white clouds. "Pretty impressive," he thought.

When the samples are delivered, they will last for about half a year and be analyzed. This is followed by the completion of a publication for scientific journals on the knowledge gained, that takes up to a year. The next research trip will be in August 2022 under the guidance of institute director Dr. Helmuth Thomas in East Greenland, this time on board the research ship "Maria S. Merian".