Will E Dna Revolutionise Biodiversity Monitoring In The Arctic?

In the first of a series of interview with ECOTIP researchers, we catch up with Paulina Urban, a German / Polish national and ECOTIP PhD student focusing on environmental DNA (eDNA).

Paulina, how did you find yourself studying eDNA?

I came across eDNA during my master’s studies at GEOMAR – Helmholtz Centre for Ocean Research in Kiel (Germany), or actually while doing an ERASMUS student exchange at the Arctic University of Norway in Tromsø. Here I met Professor Kim Præbel – the leading eDNA expert at UiT. He agreed to take me in as a master's student and taught me all about it! From there, it was a natural step for me to apply for a PhD position on eDNA.

I am very happy to have the possibility to engage in eDNA work in the Arctic through ECOTIP. My PhD in general consists of two projects, ECOTIP and DNA MIX. Both are really hand´s on projects, with practical applications – it´s exactly what I hoped to be doing. 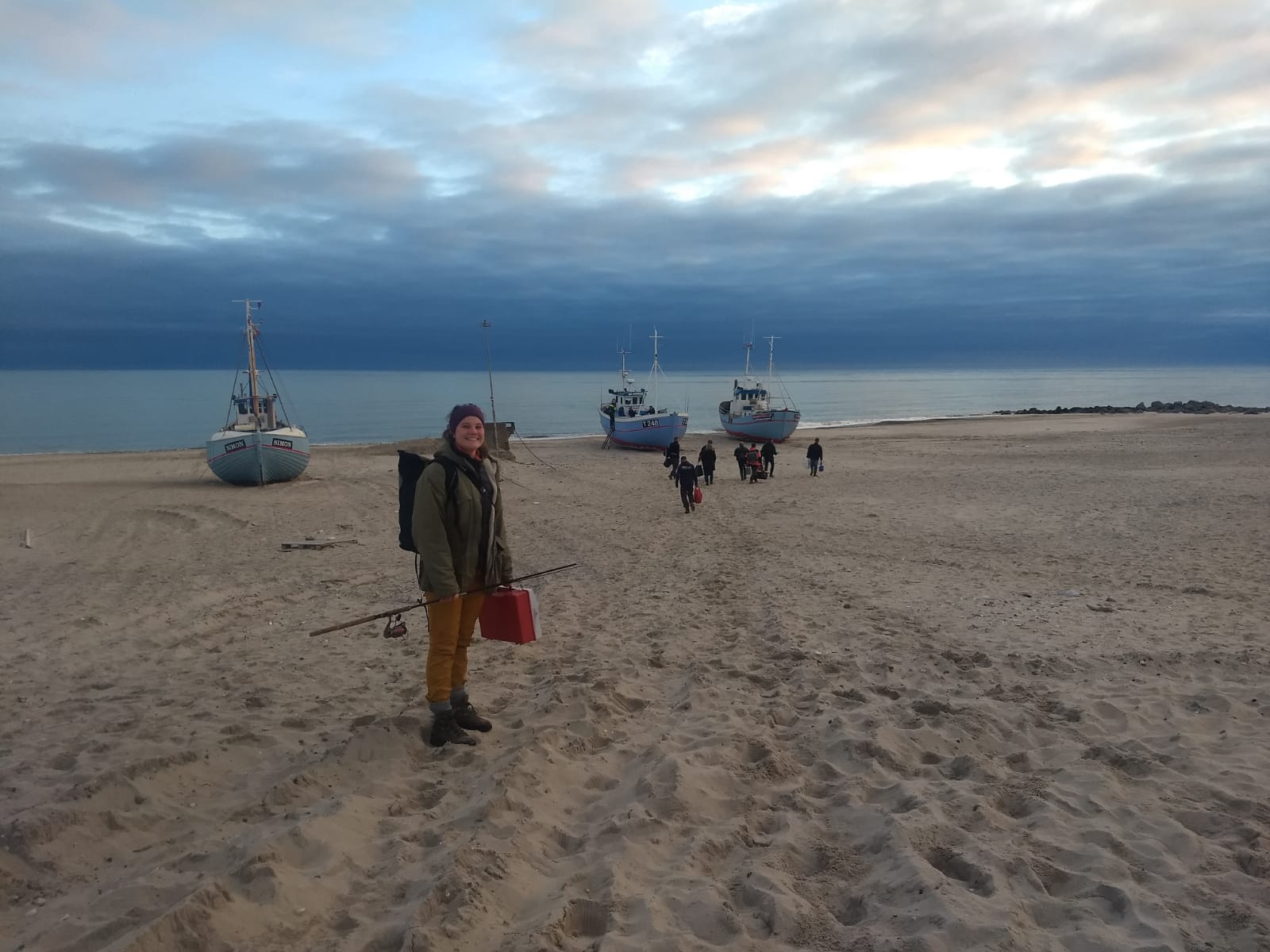 Paulina takes some time off from her work for a fishing trip on the Danish coast. (c) Paulina Urban

Can you explain what eDNA is and how it is measured?

The “e” in eDNA stands for environmental. It basically means that it is the total amount of DNA that you can find in an environmental sample. All organisms on earth shed their remains into the surrounding environment. So, you can pick any environment, be it water, soil or air, and “get” the DNA traces from it. Once you have the DNA, you can apply many different methods to it. There are two main ones: DNA-metabarcoding, and quantitative PCR approach, which is known as qPCR. In both, the goal is to assess which species the DNA came from.

Ultimately, this information can be used for monitoring. So you go to the environment you would like to study e.g. a harbour, you collect water and filtrate it, extract the DNA from the filtrate and assess which species were present in that harbour using either of the two methods. The method depends on what you want to study:  do you want to do a broad sweep and get an idea of many different species, or are you looking for a particular species?

How do DNA metabarcoding and qPCR work?

DNA metabarcoding allows you to study whole groups of organisms. In this method, you target a region of the DNA, which you know that a certain group of organisms has, for example all fish species. If you know the region in the DNA, you can apply tools that enable you to amplify that specific region. Through sequencing and bioinformatics analysis you can tell which fish species were present in the environment and geographical region you studied.

In the other approach you study one species at a time. Say you want to know if that particular crab species, for example, is living in the harbour. With qPCR, you develop species-specific primers which allow you to detect the DNA from that species only.

So how does this all relate to ECOTIP and tipping points in the marine Arctic?

So, in the first approach, I am collecting eDNA samples during the planned cruises, both in harbours and ports along the Greenlandic coast and fjords! Using the DNA metabarcoding approach, we want to screen the eDNA collected for a whole range of metazoan species, so basically look for anything that is new in the area, from jellyfish to fish.

This is very interesting. What about the second approach you mentioned?

In the second approach, we want to study the open ocean and cover more of the Atlantic part of the Arctic including the North Atlantic, Norwegian Sea and Barents Sea. COVID-19 has forced us to change our sampling approach. Thankfully, we collaborate with many scientist that have worked in this area for a long time who already have eDNA samples, including from my master’s thesis supervisor Kim! So, with the samples that we get from them, we will apply the qPCR approach. We will test if we can detect four or five non-indigenous species that were recorded in these areas already , so ultimately see if eDNA can serve for their monitoring.

Are you collaborating with others in ECOTIP?

Our ultimate goal in ECOTIP is to determine what risk invasive species will have of colonizing marine environments. We created a group within ECOTIP called the non-indigenous species storyline, where we are combining different aspects studied within ECOTIP to make broader conclusions. The team includes myself, Camilla Svensen from UiT, and Anna Törnroos and Phoebe Armitage from Åbo Akademi, Monika Kędra from IOPAN.

For example: we try to combine the eDNA part which I am working on, with laboratory experiments that assess which combination of abiotic factors, be it salinity or temperature, and biotic factors such as feeding modes, are important for animals to settle in a new area. This should give us an idea of how different species will interact, and whether there is an unoccupied space or niche for the invasive newcomers or if they will be competing for resources with existing species.

What sort of policy implications will your research have?

The Arctic Council and CAFF is definitely on our radar. Actually, on CAFF´s website they have a series of questions and knowledge gaps which they want an answer for with regards to invasive species, which was really valuable for us in tailoring our research questions and approach in ECOTIP.

eDNA sounds like such a promising solution to monitoring of invasives. Forgive the pun here, but what´s the catch?

eDNA is great, but like any method, it has its advantages and disadvantages. There are many examples in the literature showing that eDNA outperforms traditional methods in detecting species. eDNA as such, is much less harmful and costly compared to other methods, like trawling for example. However, when working with eDNA one needs to be very careful and working in a clean environment is essential, as it is easy to contaminate the samples. So far, the data obtained from eDNA can’t be used for detailed studies i.e. it is difficult to assess the biomass or abundance, sex, maturity stage, or life stage of a species, while it is possible to get all of this information from traditional methods.

The important thing is to start using eDNA as a complementary tool to the traditional methods, because it is very valuable. Even though we can’t get more information from it now, who knows what we will be able to do in 10-20 years!