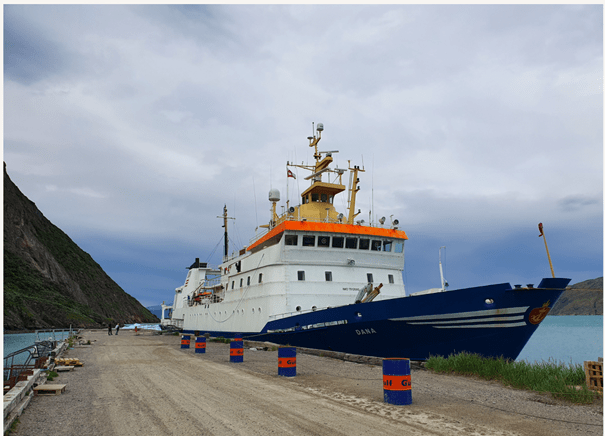 As a part of our series of interviews with ECOTIP researchers, we spoke with Marja Koski. Marja is a biological oceanographer with a PhD in zooplankton from Finland who is working as an Associate Professor at the Technical University of Denmark (DTU) and has been coordinating ECOTIP since its’ inception. She is particularly interested in the effect of climate change and other anthropogenic stressors on the community composition of plankton.

Despite being invisible to the naked eye, understanding plankton community composition is extremely important because plankton plays an important role in both food web efficiency (and thus the amount of fish that can be harvested) and the biological pump (the amount of carbon that can be sequestered by the ocean).

Can you tell us a bit about the purpose of this ECOTIP research cruise?

Research cruises are a large part of ECOTIP, since they present an opportunity for the whole project group to come together and work intensively and interdisciplinary to obtain scientific results, for instance new process understanding. The DANA cruise started north of Nuuk and went up to Disco Bay; there were five onshore/offshore transects under way. The overall goal was to investigate the interlinkages between freshwater inflow, plankton community structure, food web efficiency and pelagic-benthic coupling, and the topics that were studied included biological carbon pump,  sediments and benthic communities, sedimentation, lipid ecology, fish larvae, phytoplankton, microbial processes and heavy metals, among other things.

My main task during the cruise was to sample zooplankton and to run incubations to measure metabolic rates of copepods. This gives information of eventual community shifts in relation to hydrography, chemistry and productivity of the system, and combined with information on the metabolic rates of zooplankton, can tell us something about their role in the food web transfer and biological pump. In addition, I helped the cruise leader Dr. Peter Munk from DTU by planning the station procedures. 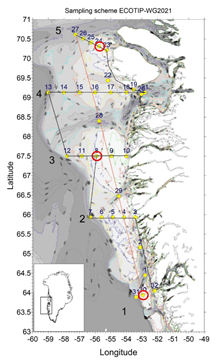 What instruments and methods did you use during the cruise?

Research during the cruise was performed using many different methods and instruments, both by taking samples and by conducting incubations. The main instrument as in most oceanographic cruises was a CTD: an instrument measuring hydrography (temperature, oxygen, salinity and fluorescence) of the water column. The CTD is connected to a rosette with water bottles that can be opened and closed at different water depths. In this way we can know more about the water column structure and from the collected water measure many things: heavy metals/contaminants, microbial biomasses, invasive species through eDNA (if an organism leaves traces in the water) and phytoplankton biomass.

We also used different types of nets for collecting phytoplankton, zooplankton and fish larvae at different water depths. The incubations (i.e. where zooplankton is incubated in bottles in the laboratory and observed over a 24 hour period) helped us to understand what zooplankton eat and how do they use their food. Sediment traps were also deployed to investigate the sinking fluxes, i.e. how much and what types of particles (or carbon) fall at particular depths. 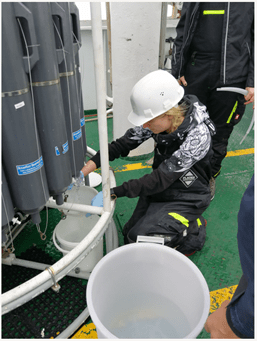 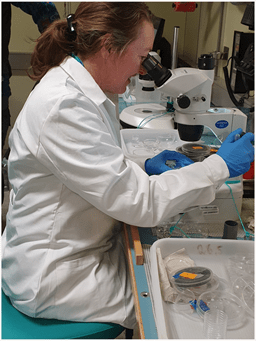 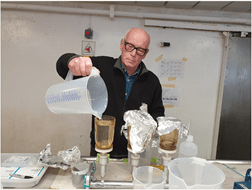 What changes did you observe in Arctic marine biodiversity? Did you discover anything that surprised you?

We collected many samples, but since they take time to analyse, we don’t have the data yet. We will hopefully have some results in the next half a year or so. However, we observed that plankton communities were extremely different between the stations, even between stations that lay close to each other. I was surprised that the differences were so big. There were clear community shifts between the stations, so it will be exciting to see whether we can identify which factors contributed to these changes.

How do recent conditions for marine life compare to historical ones?

We will eventually be able to compare the conditions we collected on this cruise to a historical cruise conducted in 1950s, since we followed a similar track with the same station locations than the previous cruise. Also, we can compare present-day conditions to the past with quite different time horizons. The paleo-oceanographic researchers on board were taking sediment samples, and it will be very exciting to see what these samples can tell us about the changes in conditions during pre-instrumental times over the recent centuries and millennia. The recent IPCC report states quite clearly that the conditions in the ocean as they are now and the rate of their change are unprecedented for many thousands of years, and it will be extremely interesting to see whether the paleo-oceanographic cores from our cruise also indicate that.

Some of the best demonstrated changes in the ecosystem around Greenland are the changes in the distribution of copepods and fish. Arctic species are decreasing and migrating northwards and Atlantic species are increasing and partially replacing the Arctic ones. What is not documented yet are the potential changes at the community level: for instance, will small copepod species increase and replace larger species? And what about changes in phytoplankton and primary production: will it decrease because of increased stratification or increase because of less ice and thus more light? Our hypothesis is that increased fresh water input will strengthen the stratification and induce a community shift towards smaller species. That community shift will potentially have large consequences for ecosystem functions, and for the services that the arctic marine ecosystem gives to us humans. 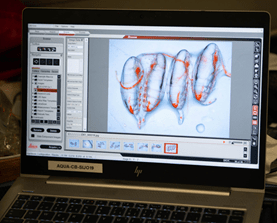 During the cruise we analysed the community composition at several trophic levels and linked this to environmental variables, which will help is to understand when a shift might happen and under what conditions.

What sort of policy implications will your research have? How can the results of this project be applied to the entire Arctic region or Global policies?

Process studies such as those we did during the Dana cruise will help us to understand how Arctic marine ecosystems function and how environmental factors influence these functions. This in turn will help us to build predictions for future changes so that we can advise policy makers, managers and anyone depending on the marine environment. One of the most important issues is whether a system is approaching a potential tipping point. In ECOTIP we are looking into a tipping point in the Arctic marine ecosystem, where a change in the physical environment can trigger a large scale community change, with consequences for us all. ECOTIP is valid for the entire Arctic region, and we hope that the insights from ECOTIP will in future contribute to ecosystem assessments in the Arctic and beyond. 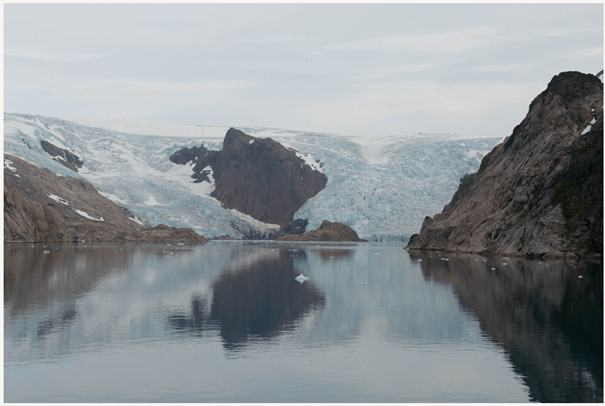