Halibut Fishing In Greenland Is Sustainable

ECOTIP focuses on understanding and predicting changes and potential tipping points in Arctic marine biodiversity and implications for fisheries production and carbon sequestration, which in turn affect global climate. The offshore area west of Greenland is one of the main ECOTIP study areas and is the subject of recent research on the Greenland Halibut.

Illustration of the study area in an offshore area west of Greenland. Source: Greenland Institute of Natural Resources.

A recent article published by the ICES Journal of Marine Science highlights research investigating long-term trends in community metrics for an important halibut fishing ground, evaluating how the fish community has changed through time.

Researcher Adriana Nogueira participating in the ECOTIP project from the Greenland Institute of Natural Resources (GINR), along with Aitor Lekanda from Spain’s University of Vigo, and Nick Tolimieri from the American National Marine Fisheries Service analysed research survey data for the past 22 years in the important fishing ground of Greenland halibut to understand the effects of both climate and fishing pressure on stocks of bottom-dwelling fish species. They studied data on 156 fish species caught in the period 1997-2019 from different depths: 400-800m, 800-1200m and 1200-1500m.

Illustrations a and b showing changes in fish communities over time in shallow and deep waters. Source: Greenland Institute of Natural Resources.

Adriana and her colleagues examined how the fish community has changed through time by observing trends in five ecological indicators: Total biomass (the weight or total quantity of living organisms of all the species in a community), mean trophic level (MTL - the position an organism occupies in a food web), mean temperature of the catch (MTC - the average inferred temperature preference of exploited species weighted by their annual catch for a given area), species evenness (a description of the distribution of abundance across the species in a community) and species richness (the number of species within a defined region) in relation to temporal changes in climate (bottom temperature) and fishing pressure. The five ecological indicators allowed the researchers to understand that changes in the fish community were associated with changes in bottom temperature and community interactions related to climate changes. 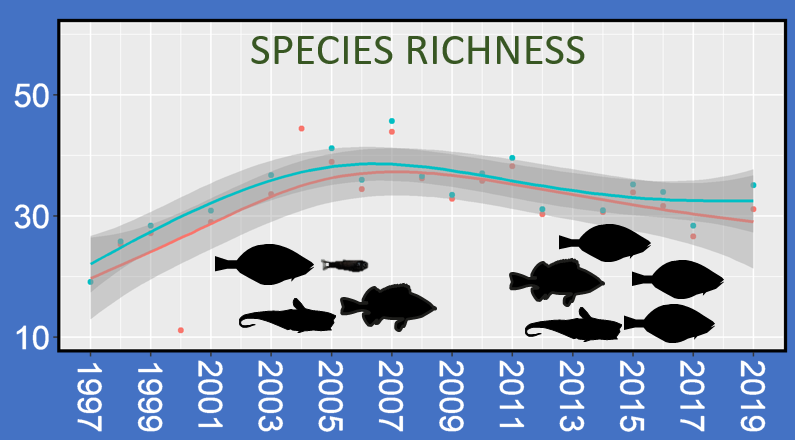 Bottom temperatures were used as expressions of climate, as they vary between periods with cold and warm water, related to variations in the global deep-water circulation, which are affected by variations in climate. Data on commercial catches of Greenland halibut (number of fishing hours and weight of catch) were used as expressions of fishing pressure. The researchers found a strong correlation between changes in bottom temperatures and changes in the composition of the bottom-dwelling fish communities. They found that changes had happened in the Greenland halibut’s preferred habitats. In the beginning of the offshore fishery, the halibut preferred deeper areas, but in the last two decades they had become more common in shallower and mid-depth waters.

The degree of structural and compositional changes in fish community structure due to temperature variation depends on the depth, such that periods with warmer bottom water result in relatively large changes in the fish community in shallower waters. Stocks of adult Greenland halibut increased over the 22-year period in shallow and medium depth water, while they declined in deep water, despite the adult halibut’s depth and temperature preferences. Increasing stocks of deepwater redfish in shallow and medium depth water may have encouraged the halibut to move into shallower waters. And while catches of Greenland halibut in the sea off West Greenland have been increasing, there has been no noticeable effect on fish stocks, which indicates that offshore fishing for Greenland Halibut is sustainable and implies that ecosystem changes have occurred due to climate change.