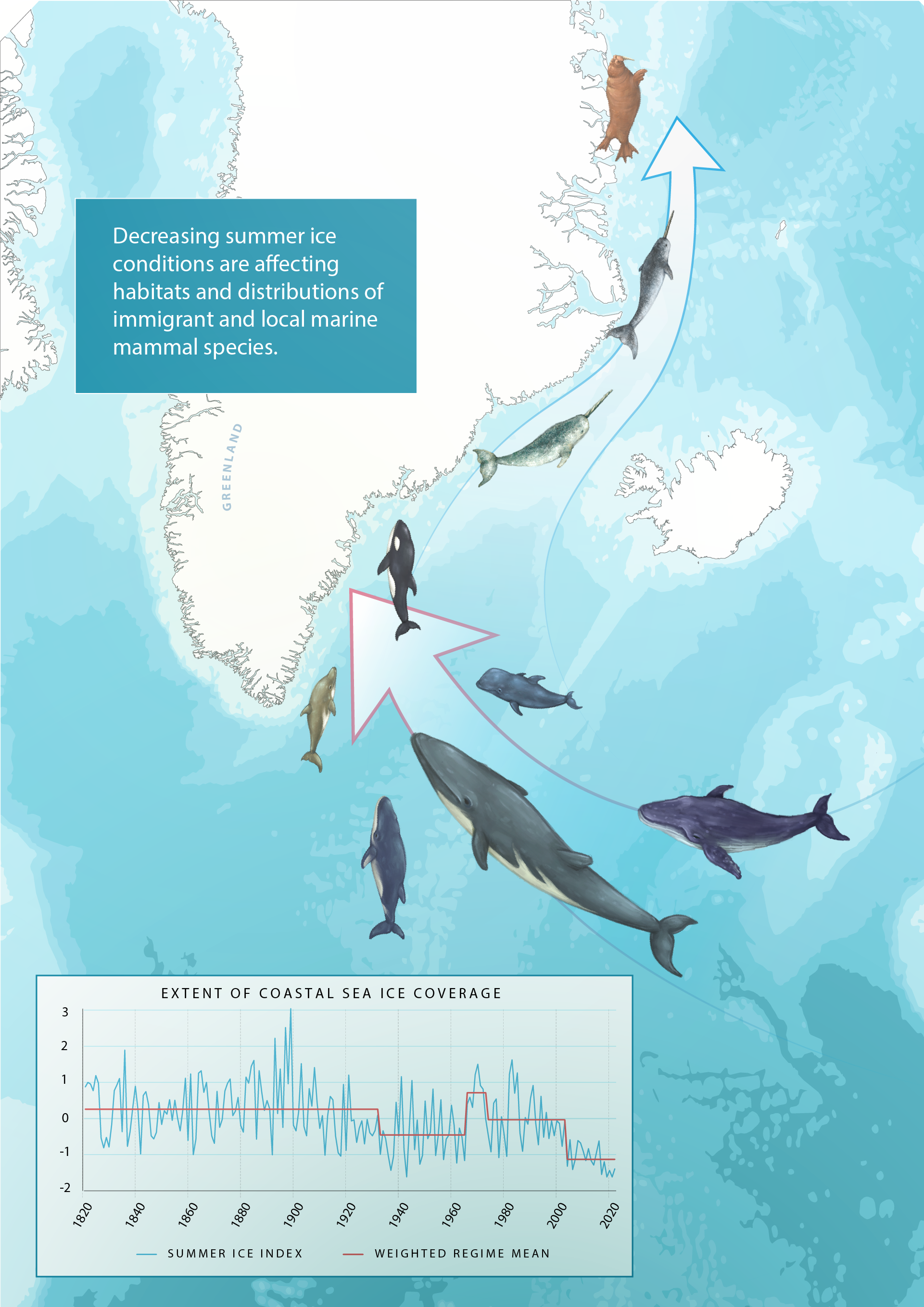 Findings of unexpectedly large numbers of fin and humpback whales in the previously ice infested waters of East Greenland now indicate a tipping point in the marine ecosystem from one regime to another that may be irreversible.

A sub-arctic ecosystem off Southeast Greenland dominated by large amounts of drifting pack ice has changed during this century to a more temperate system with less sea ice and warmer ocean temperatures. These changes in summer ocean conditions are making the region more attractive for large numbers of fin and humpback whales, and other new species.

Dramatic ecological changes such as these are considered regime shifts in the ecological literature. Shifts from one regime to another occur at a tipping point and may be irreversible. The regime shift has cascading effects throughout the ecosystem.

These are the conclusions in a new scientific study published in the internationally peer-reviewed scientific journal Global Change Biology.

The study is led by the Greenland Institute of Natural Resources with contributions from the National Institute of Aquatic Resources, at the Technical University of Denmark.

“In this case, the new regime will likely become permanent for the foreseeable future, unless temperatures cool and the ice export from the north increases again. According to recent IPCC reports, continued 21st century climate change make this scenario unlikely,” says Professor Mads Peter Heide-Jørgensen, Greenland Institute of Natural Resources.

“One of the main findings is that this event is so unusual in the past 200 years of summer ice observations in the region. We have seen big changes in some of the upper trophic levels. There are likely many other changes in the ecosystem and food web that have not yet been described and might be part of the reason why highly migratory species are coming to the region,” says Professor Brian MacKenzie, National Institute of Aquatic Resources, DTU.

Tipping points
The driver of the shift is known as a tipping element and the extent of drifting sea ice is an easily detectable tipping element, nowadays including satellite imagery.

In 2012, for the first time, bluefin tunas were caught as bycatch in a trawl fishery in waters off East Greenland. This was an eyeopener that something dramatic has happened to the subarctic ecosystem.

Also, other evidence of ecological changes were mounting like the unexpected large numbers of fin and humpback whales that were found in the previously ice-infested waters of East Greenland. They started to occur together with temperate species like dolphins, killer whales and pilot whales. At the same time observations of high Arctic species, like narwhals and walrus, were dwindling in Southeast Greenland.

This ecological shift in the dominating regime of East Greenland was driven by the decline in summer drift ice along East Greenland. A 200 year long record revealed that unprecedented low levels of coastal sea ice were reached after 2000. This opened the area to the large predators that depend on open water for air breathing.

Facts
Most of the pack ice in the Arctic Ocean is generated in a circulation system north of Alaska from where it, for several years, is pushed by currents towards the north of Greenland. From there, most of it drifts through the Fram Strait at high speed south along the East Greenland coast before entering the North Atlantic.

The study is part of the EU funded ECOTIP and a Nordic Council project investigating links between changing oceanographic conditions and fisheries in East Greenland (AG-Fisk LEGCO). ECOTIP focuses on tipping elements in the marine environment of the North Atlantic.